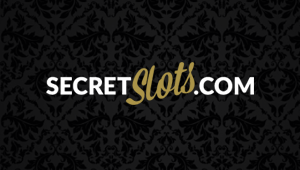 First introduced to the online gaming community in early February 2015, you would expect Secret Slots to be an ultra modern and visually appealing website, however, its initial impression is a dull one. While it isn’t necessarily of the utmost importance to have a flashy design and layout, for that doesn’t denote good quality games, when an online gaming website feels flat it can put potential new players off.

The background image of a skyline is an overused stock image that doesn’t inject any individuality into the brand. What is more, the graphics used alongside this image look cheap, as if Secret Slots is brought to you by an unknown company rather than a major casino name such as Cassava Enterprises Ltd. Although you could easily mistake this webpage for being several years older than what it is, that isn’t to say it isn’t without merit; the information provided is clearly presented. Sometimes navigation can be hindered by contemporary web designs, but not in this instance, instead each category is marked at the top of the home page, just above the advert section.

Another positive about the user interface is that the games are prominently displayed, meaning newbies get to see exactly what is on offer before they sign up, something that isn’t readily available on newer casino sites. That being said, you do have to register before you can actually play the games, with no demos to hand. Opening up an account isn’t as convenient as some sites, and the section asking for payment details doesn’t make it clear that you can skip this information until later. By not clearly stating a payment method isn’t needed upon registration, many users will input their card details even if they do not wish to in order to access the activities.

Funnily enough, despite having quite a few flaws to begin with, Secret Slots has received a lot of praise since its release, therefore making up for lack of style and smooth interaction for the promise of quality, safe entertainment.

As the name of the brand so aptly suggests, Secret Slots is all about slot based games, which means customers get the latest and most popular titles to engage with. The term many can get bandied around when detailing how many titles users can expect to play, but here it is an accurate description, at least when it comes to the slots. In some respect the amount of choice may overwhelm initially as you’ll be unsure of what to play first then again, it’s better to have that diversity rather than struggling to find anything to play.

Unfortunately, that type of variety isn’t provided in the other game categories, and therefore you become underwhelmed in short order. It looks as if Secret Slots added table games and others as an afterthought, in an attempt to gain custom from players who want something more different. Therefore, if you’re interested in table games, mini games and the likes, this site may not be for you, or at least not in the long term.

Secret Slots does claw it back somewhat by having a free to play section of titles on offer, something that will suit users who like the entertainment without having a financial stake involved. But again it is limited, and will soon lose its appeal once you’ve played them all.

As for the software that the Cassava Enterprises Ltd site runs, it is predominantly NetEnt, 888 Gaming, and Dragonfish that gamers will find here, although there are a few others included. It would be unfair to say the software selection is disappointing as these are big named companies with years of experience involved here, but it is more about the fact that their involvement doesn’t impact as heavily upon Secret Slots. The general feeling is that something is missing, despite all of the technology poured into it.

Following the genericness of the rest of the website, the fact that promotions take on a much more conventional format will surprise few. And while their welcome bonus has a 100% match on what you deposit, it lacks impact because you only get a reward on your very first, whereas a lot of sites offer bonuses on your second as well. Activating the bonus is easy enough: you simply transfer £10 or over into your account using the code PLAYNOW and your reward will be claimed.

Alongside this promo you have four more, all of which have that same lack lustre feel and do very little to excite you. It isn’t that Secret Slots haven’t tried, it’s more that they appear to have missed the mark and not offered enough when compared with competitors.

Fortunately there is a positive among all this, and that is the membership scheme that Secret Slots have in place. Although not innovative in how it works (the more points you earn the higher up the membership you climb), it gives users something to work towards, and in turn makes playing on the site a lot more interesting. While the first three levels don’t require any monthly stakes on top of the points you collect, the other two do, meaning this loyalty scheme really highlights who goes the distance with this brand.

Withdrawing and depositing your money is pretty simple at Secret Slots, and while their list of methods is by no means the most extensive, it certainly provides more than enough options for most users.

For those players who like to engage with all social media communities of a brand such as this, you will probably be a little disappointed as Secret Slots is only active on Facebook and Twitter. While these two aren’t the most modern means of connecting given the popularity of Instagram, Twitch, and similar, they are still two of the most used. Normally this would be a good thing, but given that Secret Slots hasn’t posted on either of its social media profiles since 2014, users seeking to connect with fellow gamers will have to look elsewhere.

That would naturally point towards their blog, which is said to provide latest news and tips, but sadly this too has been neglected and hasn’t been updated since 2015. The lack of online presence Secret Slots has when it comes to social media is shocking, and definitely impacts on how you rate your experience.

It would be nice to be able to finish with more pros than cons, but sadly that won’t happen as Secret Slots appears to miss the mark a lot in comparison to other sites of its kind currently available. And while it is still worthy of your custom, especially if you can’t get enough of slots, it seems unlikely that it will entertain you for long before you look for other brands.